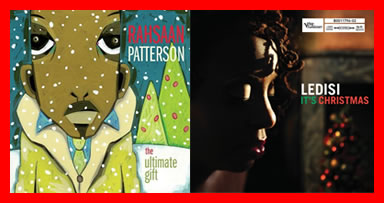 Although this is my favorite time of the year, sometimes I need a jump start to get me into the holiday spirit.  I have a few mixes that I pull out  and I look forward to replaying some of the podcasts I enjoyed last year. I don’t usually keep track of the holiday albums released each year but news that Ledisi and Rahsaan Patterson were going to make my Christmas a little brighter was music to my ears.

I have had my hands on these since they were released in the Fall. I really wish they had come out a little closer to the holidays when people’s minds are actually on getting their “fa-la-la-la-la” on. Most Christmas albums are released early for reasons I’ll never understand. By December, the average consumer has forgotten.  However, that’s why I’m here. To remind you of the good things you could be missing out on. I certainly don’t want that to happen with these two gems.

Now some people aren’t big fans of Christmas music period. How many times and how many ways can we hear “Silent Night” and “Someday At Christmas?” What’s special about Ledisi and Rahsaan’s albums is that there are actually very few of the classics on either of them. Ledisi’s It’s Christmas has a whopping 5 original tracks. That’s practically half an album. You already know how I feel about Ledisi’s voice. She can sing about clipping her toenails and I’ll think it deserves 10 Grammy nods. Plain and simple. She’s all of that and a bag of chips plus the dip. She will sing all these broads getting ridiculous airplay off the stage on her worst day.

It’s Christmas is perfect for Christmas Eve when everyone is gathered around the tree sipping on spiked egg nog and opening that one gift. Ledisi soulfully imploring everyone to “Give Love On Christmas Day” will turn the night into an all-out love fest. There are no standout tracks on this album. This is a winner from beginning to end. I loved each song more than the last. Listen to snippets on Amazon and then add to cart for yourself or another music lover in your life. Watch video of Ledisi talking about recording this project and why she loves the holidays as much as I do! The album will make a great companion to one of those box sets you may be considering.

Rahsaan’s The Ultimate Gift ain’t your typical Christmas album! He re-imagined some of the classics to the point that I barely recognized them. I never thought I would be grooving hard to “Little Drummer Boy.” Some people will hate the album for that very reason. A lot of the songs just don’t sound like Christmas music. It may not make you feel joyful in that way. But if you’re a fan of Rahsaan’s sound, as I am, you will love this album. If you want something outside the box this season, head over to Amazon, listen to the snippets and add to your collection.

Here’s some other Christmas albums released this year that may be of interest. If you know of any I’ve missed, let me know in the comments.

Here are some oldies but goodies that you can probably find at a bargain right about now.

10 thoughts on “Got Your Holiday Playlist Together Yet?: Review of Ledisi and Rahsaan Patterson Christmas Albums”