by vivrant thang on election experience 2008 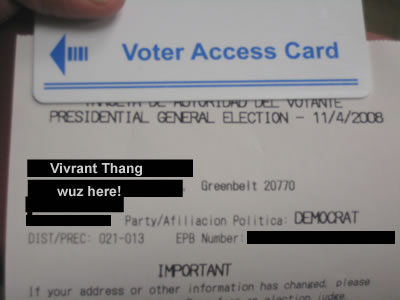 Well the day is finally here. It’s 1:22pm and I’m now at work watching CNN. Still feeling eerily calm about this evening. Not cocky. Just calm. As if this is somehow destined to be. It’s all under control. No worries!

I voted this morning at approximately 9:10am. I had been in line since 7:02. When I arrived, the lines were already snaked out of the school parking lot onto the main street.

If you’re not on Twitter, here is a recap of my experiences once I got in line, including the music I was listening to. Because of course I had my iPOD with me.

Good MORNING. In line by 7:03. Line was snaked all the way out of school parking lot to the road. We’re moving though! Estimate 450+

Negro pulled up blasting some ig’nant rap. I resisted the urge to yell “Cut that shit off!” We here on ‘potant bidness!

Mayor of city handing out out sample ballots. Mostly black folks on line although I live in pretty diverse area.

Np: Stevie For Your Love. For the love of Obama ya’ll I am standing out here makeupless with some cuties in line 🙂

Having a one woman party in line to Stevie’s Do I Do. Yup, I’m black!

WTH? Only 12 voting machines!!! I live in an area with several large communities. It’s gonna be bananas tonight.

NP: Stevie’s That Girl. As soon as I vote, I will indeed be “that girl.”

Line still about 90 percent black folx. And again, I live in a very diverse area

Just took pic of white woman with a Obama shirt on with a tree and roots. Haven’t seen one like that. Made me smile. 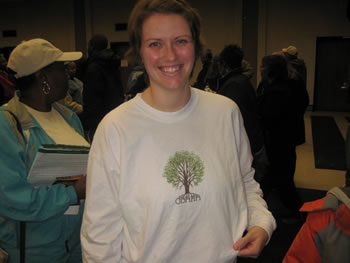 Little boy in line has shirt on that says “Life is full of important choices.” Smart momma.

It’s really about to be on. NP: Stevie’s Superstition. Funking at it’s best. How bout dem Steelers!

I’ll be recording my vote and hope nobody tries to stop me. It’s MY vote.

Why is this woman in here Deadksins geared DOWN to the feather boa? We need WINNING energy up in this camp.

Struggling to keep my eyes on the prize and not on this fine piece of chocolate man candy to the right. Jesus be a shield.

NP: Stevie’s Living For The City

I voted and recorded whole thing. Start to finish took a little less than 2.5 hours.

It was all worth it. Incredible experience.

And now we wait.

3 thoughts on ““That Girl” Voted Today!”