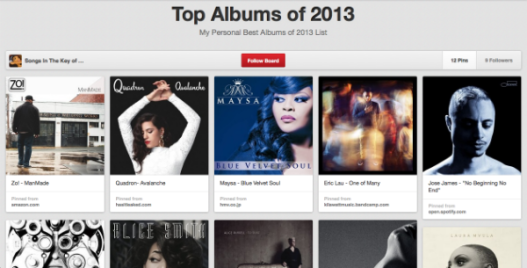 We’re halfway through a year that has gone by quicker than the speed of light. 2013 has been the worst with regards to my personal life and also as a citizen of these here good ole United States.

When I’ve been at my lowest point, sometimes the only thing left to do is get lost in the music. These are some of the albums that have been in constant rotation and thus earned a place on my Best of 2013 list. I’m curating the albums using my favorite social media tool, Pinterest, where I’ve just created a new home for the blog. If you’re a fan, be sure to follow me as I develop more boards daily.

I’m particularly excited about the discovery of Laura Mvula, yet another songstress from overseas that you should add to your playlists. You’ve already seen what she can do. Her debut album, Sing To The Moon, was released this Spring and I’ve seen nothing but praise for the striking musician’s (trained) vocals and live performance. This album touches my soul. I’m listening to it as I write this post. I’ve seen comparisons to Nina Simone and Lizz Wright and I concur with both. She’s something special. This album will bless you.

You already know how excited I was about another special British artist’s return and boy did he deliver! I took Omar’s album, The Man, on my birthday trip and made the mistake of listening to it at the spa. Not conducive to relaxation at all. When he brings his tour to the DC area, we are going to be working up a black sweat!

Check out these albums and add them to your collection. I wouldn’t steer you wrong! You may see some of your faves missing from the list. Feel free to share them in the comments. I still have a small backlog so you may see some updates to the list.

We have lots of great music to look forward to in the later half of 2013 as well. Are you on pins and needles like I am waiting to hear the new projects from Janelle Monae, Amel Larrieux, and Gregory Porter? Been a LONG time coming for the ladies!

There are very few artists whose album I would recommend you rush to pick up without having taken it for several spins first. Lorenzo “Zo!” Ferguson is one such artist. Don’t believe me? Google him and do his resume.

I was first introduced to the Detroit native as the man on keys at Foreign Exchange performances. I would always note how his eyes sparkled as he performed. I know. Odd to notice that Zo! has mastered smizing.  He just always looks truly looked happy to be there doing what he loves with his fam. I got schooled quickly that he was an artist in his own right with a discography dating back to 2001. Zo & Tigallo Love the 80’s and the ….just visiting series in particular stay in constant rotation. This man simply knows how to make good music.

ManMade, Zo’s second release with Foreign Exchange Music after the epic Sunstorm, features the vocals of Phonte, Eric Roberson, Sy Smith, Jeanne Jolly, Carmen Rodgers, and Anthony David. With a lineup like that, I already know this will make many Best of Lists for 2013.

As a social media professional, I also have to note that he did an amazing job creating build up to the release. On Facebook and Twitter, he took fans along for the ride every every step of the way from concept to completion. Artists should definitely consider Zo! as a case study on how to engage your fan base leading up to an album release.

I’m just back from celebrating my birthday in Vegas and this album is the perfect gift. I know it will be in heavy rotation because that’s what the super talented FE+ artists do—consistently put out hits.

Support real music and purchase Zo’s ManMade here or on ITunes (where I hear he is holding down the #2 spot).

Show Zo! some love in person at a listening event or release or release party near you. Dates are being added so if you don’t see your city, stay tuned!

Need to sample before you buy? Press play below.

At least ten times a day, I question why I wasn’t born independently wealthy so I can spend my days jet setting around the world attending and covering musical festivals. Until the day I make it to some of the music festivals of my dreams, I will have to enjoy the performances courtesy of Youtube.

I hadn’t heard of the UK’s Cheltenham Jazz Fest before discovering these intimate performances by three of my favorite recent music discoveries: Laura Mvula, Lianne La Havas and Gregory Porter. I have yet to see Laura live but will likely see Lianne in a couple of weeks. I was blessed to see Gregory briefly at Capital Jazz Fest here in May. My time with him was brief but I was completely enthralled. Although I was watching him on a screen on a whole other stage, I couldn’t take my eyes off him. He is a magical performer with a stage presence that will have you caught up in the rapture of him.

Get into these performances and add this festival to your bucket list as well!

Connect with these artists via their websites and social media to stay updated on their upcoming projects and shows. Spread the word about good music!

Two months before the release of Robert Glasper’s Grammy award-winning album, Black Radio, I saw the track listing and declared it a winner.

Before I proceed, if you don’t have this album or have never heard of Robert Glasper (actually put someone on the other day who hadn’t), please get familiar post-haste.  He is one of the premier artists redefining jazz right now. Black Radio is simply a phenomenal album blending jazz, hip-hop and R&B fluidly. On vocals, you have some of the best voices of our time: Lalah Hathaway, Meshell Ndegeocello, Erykah Badu, Ledisi, Bilal, and Stokely (of Mint Condition).

If you didn’t think it could get any better than that, Eric Roberson shared this today on Facebook:

This is the possible collaboration list for part two of the album, Black Radio II. This go round, in addition to frequent collaborator Bilal, looks like we may hear the likes of Faith, Jill Scott, Brandy, Mary J. Blige, Dwele,  Common, Eric Roberson, and Anthony Hamilton over the smooth sounds of Robert and the band. I was a bit surprised to see “R Kelz” on the list but regardless of how some may still feel about him, it’s sure to be a dope track.

If you’re not hype yet, these tweets might just do it for you:

RT @terracemartin: In the studio working with @robertglasper and he’s playing me what Faith did…..damn damn damn…I love her so much

RT @marshaambrosius: I’m in the studio with @robertglasper he is GREAT!!! ❤❤❤ I’m happy here!!!

I am already stoked about this project and have already declared it worthy of another Grammy nod before even hearing the first note. As soon as I get more info on a release date, I’ll likely tweet it first so connect with me there!

I was first introduced to the musical powerhouse that is Alice Smith several years ago at what would be the last Black Lily Festival (RIP). Black Lily, based in Philly, was a multi-day event showcasing the best in women’s artistry: music, film, visual arts, and more. That last festival in 2008 would be the only time I got to see Amy Winehouse perform. But this ain’t about her!

I still remember being completely awestruck as Alice, a tall, striking beauty took the stage in jeans and a ponytail and blew me away with her four octave vocal range. I don’t remember what she performed. She likely performed music from her debut album, For Lovers, Dreamers and Me (which you can stream on Spotify) which was released back in 2006. I just remember how the music made me feel. And I never forgot her name.

After a long absence from releasing new music —though not from performing— (thanks Industry Rule 4080!), a year ago, I saw posts about a Kickstarter for a new album she had in the works. I now want to kick my damn self for not getting around to supporting it because as soon as I pressed play, SHE went on my “Best of 2013” list. There is not a single song on this album I don’t like. Did you hear me? There are absolutely no skips here. It’s a stone cold groove from the first to last note. If this is what crowdsource funding for an album produces, more artists need to get into it!

Check out Alice performing one of my favorite tracks on the album, “The One,”  a slow groove with the refrain, “I’m not the one, don’t play me son, don’t you play, DON’T YOU PLAY IT!”

You’ve probably seen or heard the killing she put on Cee-Lo’s “Fool For You,” which has been floating around the interwebs for over a year. [Watch here] So glad that gem made the album.

I’ve seen so much excitement about this album from my real music loving friends all across social media. I’ve also seen a lot of “I’ve never heard of her!” That’s why I’m here — to let you know that you need to get familiar quickly and cop the new album today!

Alice is also touring so stay locked in to her website, Twitter and Facebook  feeds to see when she is coming your way. Her stage presence is mesmerizing and this is an album you’ll definitely want to see come alive on stage. DC music lovers, we’re fortunate to have her in the area twice in the coming weeks so get your tickets now!

Support real music. Cop SHE today and spread the word!