by vivrant thang on feeding the music jones

Ya’ll already know I was all over New Amerykah before it even hit store shelves. So it was a no-brainer that I would be front and center for the Vortex Tour. I decided to go up to the Baltimore show in early May at the outdoor Pier Six Pavilion. (Yea, I know I’m way late with this!).

The Roots opened to a somewhat nonchalant crowd. I don’t know if folks recognized that they were watching hip hop legends fifteen years in the game – and one of the illest MCs to ever touch the mic. We won’t even mention the uber-talented ?uestlove. There were a few heads up out their seats showing love. Maybe the real party was back in the cheap seats. Just seemed to me that for the most part, the crowd that was there and not on CP time were (im)patiently waiting for Ms. Badu to grace us with her presence.

I thought for sure they would get hype on “You Got Me.”

Just criminal, I tell you.

Although it was another consistent performance, I definitely prefer to see The Roots in venues where heads are in the know…where the energy is high. I guess I’ve been spoiled.

Here they are performing:

I remember feeling an unusually high sense of anticipation before Erykah took the stage. What would the she be wearing? What would be sitting on top of her head this time? When I last saw her some eightyears ago or so, she was still all about the headwraps and incense. There was some predictability there. Now who knows what the chameleon is going to come with next…and I love it! 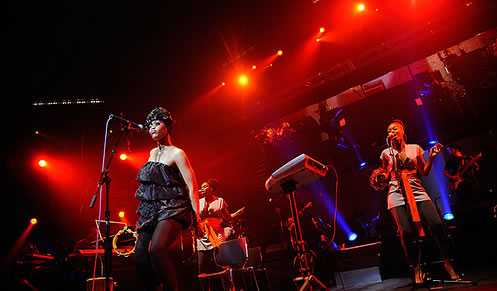 Don’t tell nobody but these pictures were shot by Todd over at ishootshows.com three weeks after my Baltimore show. This is exactly what she was was wearing…from head to toe. I was lucky to find these excellent photos, huh?

I was mildly surprised there wasn’t an extended wait for her to take the stage. Since time is for white people and all. When her background singers took the stage, the girl sitting next to me swore one of them was Erykah. I hadn’t read much about the tour but I immediately said that wasn’t Erykah but must be her sister. I was right. Evidentially I’m very much behind on my Badu news because I’m not sure I knew she had a sister in the business.

The first half of her set was all New Amerykah. I kept holding my breath for my favorite, “That Hump.” It was not to be. Here’s the set list (might have missed a few)

As she performed, it was hard to take your eyes away from the one-woman show. You barely noticed anyone else on the stage. Even as she would turn her attention to her beat machine, I still found myself watching her every move. And that black girl sure plays some funky music on that thing! As she boogies on down, you want to get up there and do it to death with her. But alas, it’s a private party. You can watch, but don’t think you can get with her. As she rhetorically asked one girl, “You think you can shake it better than me?” Of course not.

The crowd, who may not have had time to scoop up New Amerykah yet, really came alive when she went into her classic hits from the first three albums – particularly tracks from the classic, Baduizm. I feel like she would have rather not. She strikes me as the type that wants to keep moving forward, which she will with two more albums on tap this year! But that would not make for very happy customers.

Otherside of the Game (LOVE. THIS. SONG)

In between the classics, she had to remind us that she had some new stuff out! Ya’ll can groove to this old stuff but don’t forget the new. She performed two more of my favorites from New Amerykah, “Soldier” and “Master Teacher.” I particularly love “Master Teacher” because my beloved Bilal throws his voice in the mix.

She left the stage and returned for her encore with “Green Eyes,” which is probably my second favorite track on Mama’s Gun. We weren’t ready for Cirque de Badu though! She brought out her exercise balls and put on quite a show (and got quite a workout!) She also took the time to introduce the security guard to the mysteries of HER personal vortex. Only Erykah. Gotta love her.

To my surprise and to the extreme chagrin of the woman standing beside me, she ended the show with “Bag Lady” and “Tyrone.” She came down through the audience and “picked up some good shit.” I was over “Tyrone” a long time ago. The crowd wasn’t. Personally, I wanted some of that “Honey.” It was not to be. I haven’t heard of any show where she has performed it. Guess she has her reasons.

Another great one down in the books. I’m not sure if Baltimore was near one of the five natural vortices. But damnit, we sure created one that night!

16 thoughts on “Badu’s Voodoo: Review of The Vortex Tour”