Even though we both fly…

When I got the invite to attend an in-store listening party, at which Q-Tip would preview tracks from his upcoming album Renaissance, my answer was a resounding “Hellll yeah!”

You already know how much I’m anticipating this album. Not to mention, in many ways, Q-Tip is one of my muses. I used to go by the name “Total Package” in the blogosphere, which was a spin on my sorority line name. One day it just came to me how every time the song comes on, I lose my mind. I think those that know me offline would agree that the name just fits – as does the nickname, “Aunt Viv.” That’s another post for another day.

Although I played it cool because in a sense I was there working, I was a little starstruck being in such close proximity to the dude who was one of the main reasons my bells were ROCKED just a few short months ago.  Any self-respecting fan of real hip-hop should feel me on that.

There was no need for that though. Without even spending any length of time talking to him, it was clear that although Q-Tip is a musical genius, he is still regular folk (you too Questo). As he talked about his love for the music and how after all these years, he still gets butterflies before he performances, it was all genuine.

He made the important point, that should sound familiar, which is that you gotta love what you do. He said that practitioners of hip-hop today may be hard workers and hustlers but you have to truly love the music. Q-Tip says that even today, some twenty years deep in the game, he still pinches himself because he can’t believe that he’s blessed to be able to do what he does as an artist – which is to bring us real hip-hop like what you’ll find on Renaissance.

Check out Q-Tip taking us behind the scenes: “The Making of Renaissance“

Here is the album cover ( which gets my stamp of approval) on which you can see a tracklisting.

Here is Q-Tip giving us a taste of “Dance On Glass,” “Offishal,” and “Life Is Better.”

We were fortunate to hear “Shaka,” which features a speech from Obama. Q-Tip has stumped for Obama and the song has the campaign’s approval. It’s also dedicated to the memory of Dilla and Daddy Q-Tip.

Check out “Move” and then “Shaka”

Since I know we have some D’Angelo fans on here, you’ll be happy to know that Q-Tip also confirmed that he is in fact hard at work in the studio and his new music is all that and then some. Color me naive but I’m fully expecting a new album in my hands in 2009.

It was cool to be up close and personal with Q-Tip while he was sharing the music. At times, I felt like a voyeur – like we weren’t even there. He was lost all up in it – which was probably a good thing since there were folks there more concerned with shooting the shit than LISTENING at a LISTENING party. But that’s another rant for another day.

Those that were there for the music were truly feeling what they heard and are excited about the album, which will be in stores on November 4 – the day of change!  That’s the day we will have a renaissance in music and hopefully the beginning of a renaissance in this country.

The night ended perfectly when I was able to get my Renaissance poster signed “To Vivrant Thang.” Check one more thing off the bucket list. 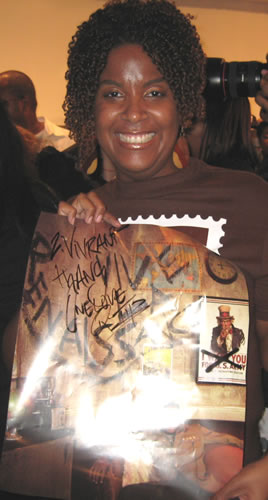 On November 4, I know I plan to go vote and then cop the album in that order. You should do the same. I can’t remember the last time I was this excited about a hip-hop album hitting the shelves. From what I heard, it will be worth the wait.

More video will be on my You Tube channel in the coming days. I know you’re already subscribed so you shouldn’t miss out. Meantime, you can head over to Soul Bounce and check out nOva’s review.

Let me know what you think of these tracks in the comments.