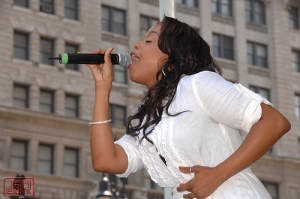 Every since I saw Chrisette Michele perform in DC last Fall where she hit us with new music, I have been anxiously awaiting news of her forthcoming album. According to her Myspace blog, it appears to be complete!

I’m so so so excited to share with you some new music! this new album took NO TIME to record. it seems like every word that i sang was already on the tip of my tounge before i even got to the studio. one song i dreamt, came to the studio the producer had music that already went with it and then my new friend, writer filled in the blanks like only he and i can! it was just so fateful.

The new music she refers to is a single called ‘Epiphany’  the negro-you-done-messed-up-for-the-last-time- and- I’m-leaving song that she does so well without sounding trite. She wrote almost all of the songs on I Am but turned that task over to Neyo on this track. I am not big of a fan of the music that comes out of that boy’s mouth. However, he is a home run hitter with that pen and a pad. And he has scored again with this one.

I stan for Chrissy (and I’m not alone – her You Tube videos on my channel are among the most viewed) and if this is any indication of what’s to come, there will be no sophomore slump here!

Let me know what you think in the comments.

Also have to mention and underrated male soul singer that has a date for his next release. You’ll remember V has been back on my radar since I saw him on tour with Jill twice last year.

That Jersey boy can sang! You know how we do!

It’s been three years since his debut album, The Revelation Is Now Televised. The release date for his sophomore effort, The Paradox, is March 17th. You can preview and download two singles “Gone Away” and “This Moment” over on his Myspace page.

And the vigil continues.