by vivrant thang on rock the bells concert review 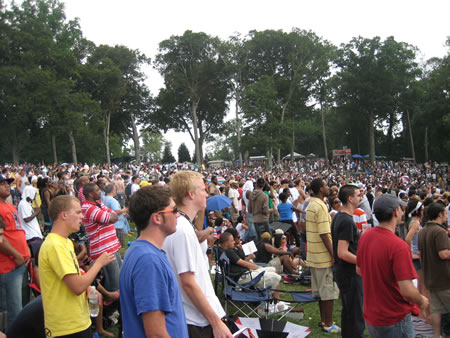 I already told you about the night I fell back in love with hip hop. Well the love affair got that much stronger this past Sunday at the all-day Rock The Bells Festival aka the “Hip Hop Woodstock.” Hands down, this was the best show hip hop concert I’ve been to and that’s saying a lot.

I’m not the only one that felt that way. I belong to a hip-hop meetup group and a lot of members who have been been to way more hip hop shows than I have felt the same way. It wasn’t just the line-up, which I will get to in a minute, but the overall good feelings that abound from being in the presence of real emcees who know how to move the crowd.

I was very impressed with how well the show was run. I have no idea how chaotic is was backstage but you couldn’t tell from where we sat. They kept to the posted schedule and we were never waiting very long between acts.

The crowd, which was extremely diverse (read: I see white people), was quite the feel-good bunch. They just wanted to spark up their L’s (subjecting me to a hell of a contact high but whatever…) and party on down to some real hip-hop. I didn’t see or hear of any situations – although I almost started one when these chicks spilled their margarita on my stuff. However, my murderous angry black woman glare was punishment enough. You know I got a history of almost having to throw dem bows with white folks.

As you’ll see in the videos, I had lawn seats which is what I prefer for a show of this length – over 10 hours. I was out there with my feet up feasting on fried chicken, tomato and mozarella salad, fruit and assorted snacks. When I saw the $3 price tag on a bottle of water, I knew I had made the right decision! They were flirting with a gallon of gas with those prices!

Some people had standing room only tickets right in front of the stage and stood for the whole time. While it would have been cool to be right in front of the stage, I am still exhausted from sitting/standing for the whole day so I would have never made it. Besides the humidity was overwhelming. There were times when all I could do was sit back with my spritzing fan and pray for a breeze.

By the time I arrived, I had missed Jay Electronica’s first set but MURS was rocking the mic. I’ve heard of him because I’m a 9th Wonder fan and they have done a couple of albums together. He was nice – from the few bars I caught.

Wale is hot right now here in DC. Unlike Anita, I felt that he wasn’t “giving us the best that he got.” Frankly, I was underwhelmed. He kept telling us that he would be back later as if that was an excuse for his lazy performance. I think he mentioned that they had him going on early. Doesn’t matter. You’re hot in the game. You got to be ready to get it in at any given moment. However, I’m going to give him the benefit of the doubt since some people swear by him. I was less than thrilled with Raheem Devaughn the first time I saw him and now he gets nothing but love over here. So we’ll see.

Dead Prez and Immortal Technique were up next. I can’t really comment on them because I’m not a huge fan. I had actually never heard of Immortal Technique before that day. He is nice with his – yelling talking about some real shit once you got past the harsh delivery. I’ve never been a Dead Prez fan and honestly, I don’t really remember their performance.  From what I could tell, folks may have been underwhelmed. The energy seemed kind of low up there close to the stage. Anyone know different, please feel free to comment.

Before I go any further, I have to mention the host, Supernatural. Evidentially, once again I am late to the party because he is well-known for his legendary freestyle battles. He ripped the mic to shreds. His flow was reminiscent of KRS-One and that’s saying a lot.  Don’t sleep on this dude. Hell, I’m probably the only one that wasn’t in the know. But he asked us to spread the word and I had to comply! Video evidence is coming soon. Meantime, check him out performing “3 MC’s.”

A number of DJs were on the 1s and 2s throughout the day but I was most excited to see DJ Beverly Bond representing for the ladies. Some feminine energy was most needed up there. DJ Scratch, formerly of The Roots, was ridiculous with the beatboxing. Had me reminiscing for real.

Once Rakim took the stage about 3pm, there was no more rest for the weary. I don’t think I sat down for more than 15 minutes at a time for the rest of the day. The rain came down and I ignored it. A black woman voluntarily standing out in the rain?! I must have been high. But how can you sit down when one of the greatest to ever do it is on the mic? Not to mention Raekwon & Ghostface Killah, De La Soul, Meth & Redman (with his fly ass ‘hawk), Pharcyde, Mos Def, Nas, and A Tribe Called Quest are in the building?! I can rest when I die!

Here are some random thoughts I had through the rest of the day:

Rakim is still the lyrical assassin. Few can touch him. That’s over 20 years in the game right there.

The most beautifullest thing in this world was seeing thousands of people throwing up the WU sign.

Tribute to ODB got me a little misty.

Meth and Red stage diving was the coolest. When they hugged at the end of the set, I got misty again.

Nas telling the “old niggas” to step aside for the “new niggas” is probably disrespectful but still humorous.

Wondering why the hell Afrika Bamabaataa was on the B stage. That was a crime. Apparently there were some great artists on that stage – like Spank Rock- but a sista was not moving!

Me losing my everloving mind when Q-Tip performed “Bonita Applebaum” and “Vivrant Thing.”

Thinking that I need to get Nas’ album ASAP. And I don’t buy hip hop albums like that. I’ve heard nothing but good things about it and I was feeling the cuts he performed.

What is Bilal’s music director doing up there performing with Q-Tip?!

I liked Mos Def’s set although he was definitely on some other stuff.  “Miss Fat Booty” was not in the building. I didn’t mind because I was feeling a lot of his reggae-flavored joints. I was winding my body like I was in Jamaica mon.

I’m still downloading videos and probably will be for quite a while. I did get a few up for your viewing pleasure. They are far from my best work (i.e. you may be subject to sea sickness and random singing/rapping and commentary). If you want to see better videos closer to the stage, just search You Tube or check out the view from “Life In The Chocolate City.”

Tribe Called Quest, “Relax Yourself” and “Check The Rhime”