I didn’t have to give much thought to my choice for this week’s spotlight. The assignment was to pick an artist(s) we want to be like or want to sound like.

Usually, I try to step outside the box a bit with my selection – showcase artists people may not have heard about or not thought about in a while. Couldn’t do that this week. I just finished talking about all the reasons why I love this woman and damnit, it bears repeating!

Hopefully, I’m preaching to the choir when I talk about this woman’s musical ability. The words and sounds that come out of her mouth are heaven sent. Her live performances have moved me to tears. I shouldn’t need to convince any of you about that. You should already know. So I’ll talk about some of the other things I admire about J-I-L-L-S-C-O-T-T.

Bow down to the queen.

The Way/ Whenever You’re Around

Hungry for more? Be sure to check out my review and videos from the concert I attended last month.

The party’s not over ya’ll. Check out some of the artists that other Old School Friday participants admire.

by vivrant thang on jill scott: o how i love thee…let me count the ways 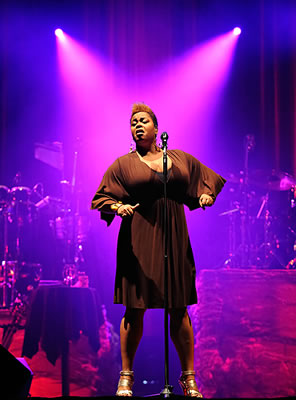 We’re only a quarter of the way through the year but I think it’s safe to say that The Real Thing tour featuring Jill Scott, Musiq Soulchild and Raheem Devaughn will easily top my list of the best shows I attended in 2008. It’s been almost two months since the show and I still haven’t come down from the Jill Scott experience.

When her tour dates were announced, there was no question that I would be hitting Philly for the show.  Whenever possible, I prefer to see an artist perform at home. When I heard Musiq was added to the lineup, it was a done deal. 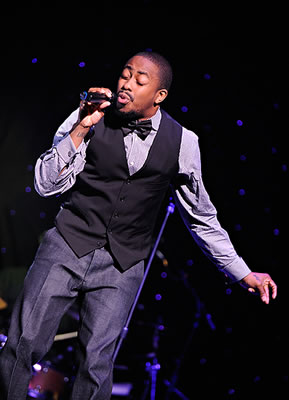 Raheem opened the show to a bunch of empty seats. They don’t play that CPT at the Licouras Center. No matter. The way Rah worked that stage, you would have thought he was playing at home in a packed DC venue. He was all dressed up in his Easter suit, looking suave and debonair, showing Philly what he was all about. He performed a couple of songs from the first album, The Love Experience (which remains my favorite) and a few from his latest release, Love Behind the Melody. He closed with the sistas anthem, “Woman.” Of course we were all on our feet because we all just know he wrote that song about “you and you and you.”

Mama is so proud of that boy! Up there opening for Jill Scott. What I love about Rah is that I believe no matter how big he gets, he will always stay humble. He wasn’t an overnight success. He paid his dues, unlike many of these fools in the game today. So he is actually grateful for our support. And I’m sure he’s even more thankful to be doing what he loves and making some cheddar! So Rah if you’re listening, all is forgiven for this blasphemy. You go boy!

Musiq was up next. This was my second time seeing him perform live. Not the most exciting performer in the world. I wouldn’t go so far as calling him the musical equivalent of a sedative. I’ll just say that Musiq’s strength will always be in the fact that just listening to his songs makes you feel good. You don’t need him to do much more than stand there and sing. You’re not even really watching him – just reminiscing about dedicating “Just Friends” or “Love” to that special someone.

I did manage to capture a few videos,  despite the sign on the doors that said “No recording.” I’ve always been a rebel. So they are a bit janky since this was a covert operation. You might hear some cussin’ in the background too. Deal.

By the time Jill took the stage in all her mohawked glory, the crowd was on fire. They would have still been on fire had they not been warmed up. This is their girl from the streets of North Philly. Look at her now. Sold out crowds around the globe. Three time Grammy award winner. Movie star. Published poet. Don’t get it twisted. Same old Jill. She’s going to throw on her hat and check out Eric Roberson with her people. No big deal. I do believe she will always be able to make us feel like she was just spitting at the Five Spot the previous night. Before we were asking “Who Is Jill Scott?”

Believe me, Jill. We know.

As we know, I use “stan” pretty liberally on this blog. What does it truly mean to stan for an artist though? Me and an associate were discussing the shows I’ve been to and the conversation turned to Jill and the current album. She asked if I had heard it. I said of course! I had it the second Best Buy opened on 9/25/07. She asked how I liked it. Like? I LOVED it. She scrunched up her face and said “You liked that mess?” I literally had to restrain myself from slapping her upside her head a la Homey D. Clown. Vivrant don’t play that. No, you cannot have your own opinion about anything when it comes to Jill…around me. That’s just how it is. (Remember that in the comments!)

Ok, let’s just say a particular song on the album wasn’t one of your favorites. By the time that woman is done sannnging the hell out of it live, there’s just no way you don’t take another listen to that song when you get home and fall in love. That’s a true artist. No straight album version with Jill. She’s always going to give you more than you bargained for with the live arrangements.

I wasn’t able to capture what she did with “The Fact Is (I Need You)” because security must have thought I was going to bootleg and shut me down…temporarily. No matter – because I’m not sure I could have even captured it. Jill, backed by male soul singer, V, did a medley of “I Need You” and one of my favorite Atlantic Starr songs “Send For Me.” (What ya’ll know about ‘put a message in a bottle’?!) I literally had chills throughout the whole performance. I really liked that song from Beautifully Human but now I am in love with it because I’m always going to remember that live performance.

Jill closed the show with “Lyzel in E Flat.” You still have to wonder how a love that would inspire a song like that could end. I think I know. Lyzel has got to be the dumbest negro walking this Earth. Jill’s a class act so she won’t say it publicly but I will. Man up playa! You don’t see Kendu acting a fool. He is right there chilling next to Mary in that Chevrolet with dollar signs in his eyes. I don’t care if we don’t know what went on behind closed doors. Because I’m a stan, I could care less. I know it was all his fault. Good riddance.

After leaving the stage on that note, she came back out to share her wonderful news with us – how the television adaptation of No. 1 Ladies Detective Agency, in which she stars, has been picked up by HBO for 13 episodes. She encouraged the crowd to follow their passion and live their dreams. Preach!

While I look forward to seeing more of Jill flexing her acting chops, as she is definitely a natural, I admit I’ll always be feenin for that next album…that next live performance. What can I say? Do you blame me?