by vivrant thang on stevie wonder

“When creating music you have to live life – be inspired by life – to create experiences that are worth sharing with the world. ” -Stevie Wonder

I celebrate a lot of artists here on this blog. However, if there was one that that inspires what I do in this space, it would be undoubtedly be the one we call “The 8th Wonder of the World,” Mr. Stevland Hardaway (Judkins) Morris.

When I started conceptualizing this blog, I thought about icons whose music has shown up repeatedly in the soundtrack of my life. Artists like Marvin Gaye, Earth Wind & Fire, Luther, Michael Jackson, Mary J. Blige, and Jill Scott (to name a few). While listening to At The Close of A Century, the name Songs In the Key of Life and the blog’s direction just came to me. Ironically, the album was released the same month I was conceived (September 1976)  and was arguably one of the most influential albums of the decade. My goal here is to inform and influence my readers’ appreciation of real music. So while it was a gutsy move to name my blog after one of the Top 100 albums of all time, something about it felt right.

The running joke has always been that Stevie has been fooling us all these years and can really see. Wouldn’t be hard for me to believe! I’ve always been in awe of his gift of composing music that seems inspired by the beauty he’s seen across the world…and the ugliness. The key word is gift, something he was blessed with probably from the moment he lay in that incubator and lost his sight. He lost one thing, but gained so much more – five decades of blessing us with thirty-five albums chock full of masterpieces. Music that speaks to social and political issues of our time – and they remain relevant decades later. Songs that champion a universal love – one that transcends color or creed. Love of a partner, love of a child, love for what you were born to do, love for yourself.   I don’t know about you, but I am so thankful to know and appreciate his music. (I also feel blessed to have been born exactly one week after him. Taureans rule!)

In these days and times of having to contend with the foolish radio programming that assaults our ears, I’m happy to know that there are DJs that feel his music deeply and want to keep it alive. The best party I attended last year was DJ Spinna’s Wonder-Full Tribute party. When I think back to the emotions I experienced at that party, this is what I see. 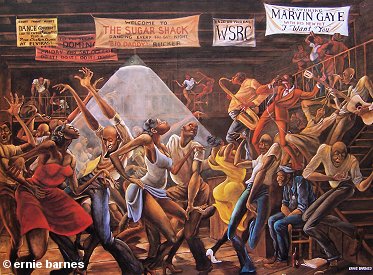 If it comes to a city near you, I would strongly urge you not to miss it.

It’s damn near painful to choose a couple of favorite Stevie songs. I managed to do it for my Top Fifty Songs list. I chose “As” and “Ribbon In The Sky.”  The way I’ll limit myself from barraging you with fifty eleven videos that you won’t watch anyway is to share my favorites from Songs In the Key of Life.

Knocks Me Off My Feet

Let’s celebrate Stevie today. The rest of my favorites are on this list. Love to hear about some of his music that would appear on the soundtrack of your life.

13 thoughts on “‘Happy Birthday’: Celebrating the Life and Music of Stevie Wonder”