It’s been four years since we’ve had an album from Bay area songstress Goapele. I’m sure she’s another artist on your wishlist for a new release post haste.

Meanwhile, many thanks to the good folks over at Bama Love Soul for alerting me to two “newish” tracks she released late last year. Both these songs really spoke to a sista!

Believe it or not, Viv is pretty shy when it comes to the fellas. No, seriously. “Don’t Be Shy” may help me muster up some gumption as we move into prime flirting season. Classic Goapele that has me feenin for more.

“Chocolate” was commissioned by LG to introduce their Chocolate 3 phone. Now this is the kind of song about chocolate that I want on repeat!  My longtime readers know that with lyrics like “I could never get enough. My love for chocolate’s got me wanting you,” this one definitely one spoke to me! I also love Goapele’s voice over more uptempo tracks and this has a bit of a techno vibe.

You can download both of these songs for free over at Goapele’s Band Camp.

She has been performing pretty consistently, mostly out on the West Coast. She brought in 2009 with Mos Def at his Sneakers Required party. View a clip from that party here. She opened her set with Prince’s 1999. I would kill to have seen that. 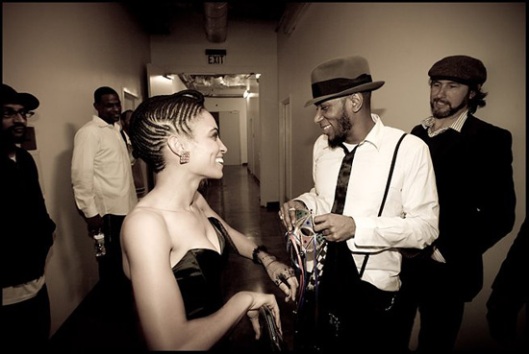 No word yet on a release date for her fourth album. Rumor has it that she’s in the studio working with Krucial Keys. Music heads if you know something, drop me a line in the comments. I’ve seen mention of a live DVD of 10 tracks taped during a performance at the Great American Music Hall in the Bay Area. We’ll keep watch for more information on that.

You can keep up with Goapele news via her official website or on her Myspace page.

Don’t forget to stop over at Band Camp and download these hot tracks!

9 thoughts on ““New” Music from Goapele”