I have stayed away from rants about the foolishness some of these gossip bloggers spew because hell, since they consistently remain among the top ranked in the black blogosphere clearly it’s okay. However, I just had to say something about the Malia Obama interview on Access Hollywood.

Let me preface this by saying I am a Michelle Obamaholic. I’ve said before that I wish she were running. She can do no wrong in my book. If I had a daughter, I would tell her that besides her Momma, this is who she should look up to. So by extension, I love the girls, Malia and Sasha, because Michelle is raising them in her image. I know they will grow up a heap better than those alkie Bush twins.

So it was very happy after watching the first two parts of the Access Hollywood feature taking us behind the scenes of the daily life of the Obama family. Even though they are poised to become the first Black family to occupy the White House, they still try to keep life as normal as possible. The kids were allowed to speak and we could see that Malia is growing up to be an intelligent, insightful and extremely articulate young lady. She is clearly her father’s daughter.

I instantly fell in love with her because she reminds me of my eleven-year-old goddaughter. (Not to mention, I’m partial to little girls. They love me. ) Although we don’t know where she got it from, because it certainly wasn’t from her Momma, she has been expressing herself far above her age level since she was about seven or eight. And I’m thrilled about it! We’ve never made a big deal about it because we didn’t want her to think that how she spoke was anything but normal or that she was acting “grown.”

Gossip blogger Sandra Rose disagrees. Here are excerpts from the four entries that she’s posted about this.

Precocious might be too tame a word to describe Malia Obama. This little girl is TOO grown. I blame the parents. What can one expect when both parents are frequently on the road leaving their small children to practically raise themselves?

I watched the video of 10-year-old Malia Obama speaking to a reporter and I swore I was listening to a 19-year-old speak! One of my loyal readers wrote, “This little girl is the most well articulated 10 year old I’ve seen in a long time,” — proving that Malia is too mature for her age.

About Part One of the video she says,

In the above video, Malia Obama chastises her dad, Sen. Barack Obama, for shaking other kids’ hands. “You don’t shake kids hands that much… you shake adults’ hands,” she scolds. In response to her dad asking what he should do instead, Malia says, “you just wave or say ‘hi’.”

Obama should have gently informed his daughter that it’s not her place to tell him whose hand to shake. But I guess he thought she was being cute. This is what happens when you raise your children over the phone from the campaign trail. It’s never “cute” for a 10-year-old to chastise her father. When they lower the legal drinking age limit to ten, then I’ll listen to what a 10-year-old has to say.

Admittedly, I’ve been reading Sandra for a while and I know that she purposefully says ignorant stuff to get folks riled up. Somebody e-mails their girl the link “Chile check out what mess Sandra had to say today!” = more hits = mo money mo money. I get that. That’s why I didn’t link directly from here although she doesn’t need my lowly traffic. I’m sure she got enough from Michelle Obama Watch (a site you should be reading daily ladies!).

I think every single one of her “loyal” readers and those over at Michelle Obama Watch vehemently disagree. No thinking person who watched the video felt that Malia was “chastising” her father or acting fast and grown beyond her years. Do you think either one of them would stand for that? It would have happened one time and by the time she regained consciousness….

And to say that this shows that these kids are raising themselves is not even worth addressing. Just blantantly false and plain ludicrous.

So just how is Malia being “grown?” Because she speaks intelligently and shows insight far beyond her years? Because she actually reads magazines and doesn’t get all her news from the computer? (I actually hope they keep her away from the computer because I’m VERY afraid of what she’ll find there.)

From the Assassination of Barack Obama exhibit: 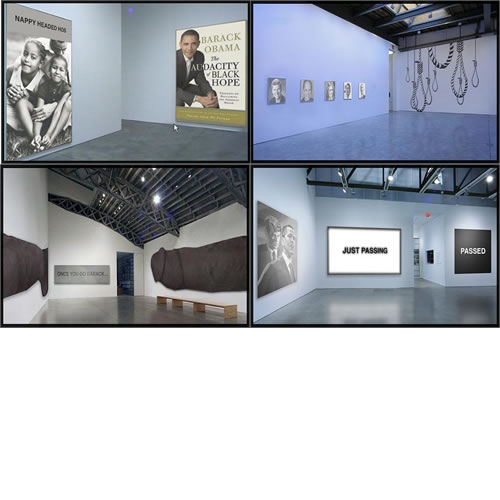 However, the sad thing is, Sandra is not alone in her way of thinking. In our own communities, we’ve long battled with these kinds of issues – the whole ebonics debate and if there is such a thing as “talking white?” Kids dumbing down in fear of bullying and other kinds of retaliation for excelling in school. It’s a damn shame we’re still discussing this in 2008, a year that will go down in history books.

In any event, we’ve likely heard the last from these adorable girls and it’s probably for the best. They need to remain out of the spotlight and shielded as much as possible from the ignorance. If they keep messing with those kids, we’re going to see an Angry Black Momma come out – and rightfully so!

I for one will miss them – Sasha being a typical seven-year-old, preferring a trip to the ice cream parlor over sitting in front of the camera talking to some strange lady. And old soul Malia, who already wise enough to know that what her parents have is special. I wish Deondra could see more of her. She’s “grown” too. Just the way I like her.

Oh and Jesse, go sit your ass down somewhere.